Spotlight on the IP strategy 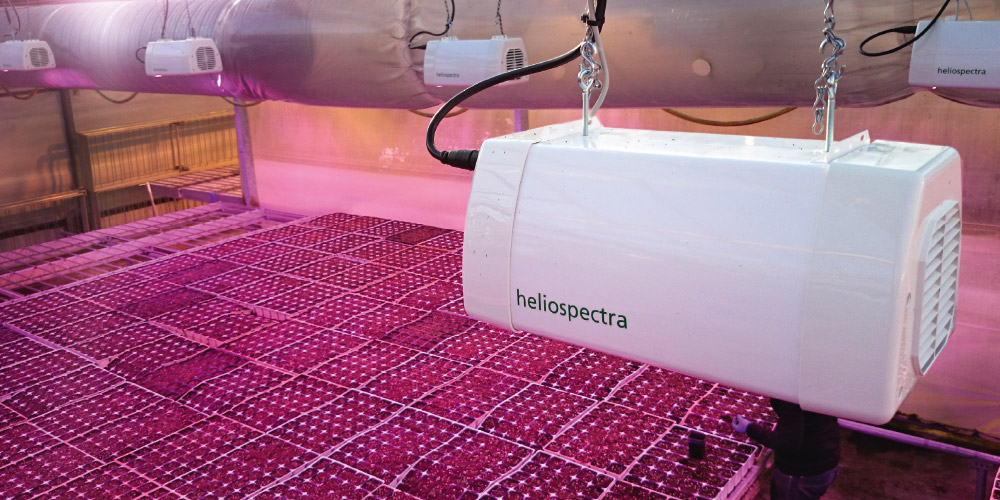 Heliospectra’s IP strategy is an important part of the company’s work and has been since the company was founded in 2006. Just a year later Heliospectra applied for its first patent. The company prepared an IP strategy at an early stage and the Board of Directors helped with its development. The strategy is important from many aspects, for examplewhen Heliospectra raised new capital to show investors that it protects its intangible assets professionally.

Heliospectra focused from the start on working in various light and lighting fields for companies and organizations involved in the cultivation of plants.
”We had two ideas,” says Staffan Hillberg, CEO of Heliospectra. ”Firstly, we saw an opportunity to replace light fittings in greenhouses, which are inefficient primarily because the light from the lamps produces a limited spectrum, and there is high heat loss. Secondly, we created a computer system that senses how the plants absorb and use light and then uses the information to optimize the lighting.”

Heliospectra’s operations now cover three market areas.
”The major market is greenhouses of various types and sizes,” says Staffan Hillberg. ”The second area is the research market, that is, large universities and institutes that conduct research into plants and the cultivation of plants. This also includes a number of large companies that develop seeds, pesticides, fertiliser, etc. The third area is slightly leftfield. It involves cultivation of cannabis for medical use in North America. This is a relatively large market that is currently growing really fast.

The IP strategy also played a major role when we raised new capital and when we were listed on the stock exchange. It shows that we protect our intangible assets professionally.

”We realized early on that our intangible assets would be important to our success, in particular on the international markets,” says Staffan Hillberg.
”We applied for our first patent in 2007. It has now been granted and we have submitted applications for six more patents.
”Over the years, we have received professional capital from business angels and other large investors such as Industrifonden, Weland and Midroc. With the arrival of new shareholders, we engaged a patent agency. They also carried out due diligence and looked at our IP situation. This resulted in the beginning of our partnership with Awapatent, which has been in place since 2011.”

Its IP strategy is a central element of Heliospectra’s activities. The company has established structured internal processes for developing various patents.
“It is important to secure IP rights early on when you work with partners such as for example Chalmers,” explains Staffan Hillberg.

“Heliospectra is also extremely careful to draft non-disclosure agreements.
”The IP strategy also played a major role when we raised new capital and when we were listed on the stock exchange. It shows that we protect our intangible assets professionally. The IP strategy covers not only patents but also strategic, long-term work on trademarks and design protection. These are also areas in which we work with Awapatent.”

What is protected purely in terms of products?
”We protect the unique features of our products and technology that is subject to our IP strategy. We are clear about the areas that we need to protect. We take a close look at everything that comes under these areas. On the basis of the strategy and the areas, we can of course also decide not to protect, for example, certain algorithms because we don’t want the information to be publicly available.
”Innovations are our most important means of competition. We have an internal innovation council that continuously reviews our projects to create new products and develop existing ones. The patenting process is an extremely important part of this process.”

Do you monitor your competitors in any way?
”Yes, we continuously monitor our competitors and what they patent,” says Staffan Hillberg.
”This is important information for our strategic work, in particular in the IP area.
”Infringements are monitored by Awapatent. We lack the resources to do that ourselves. We focus on developing our business. We have not had any infringements so far. However, we get information on trademarks, when something appears that is close to our field. But so far we haven’t needed to take any action.”

Where are you protected geographically?
”We have a broad level of protection, but not worldwide. We focus on North America, Europe, China, Japan, South Korea and Russia, that is, markets where cultivation is widespread. North America is the most important market and four of our 23 employees are also there. Europe is also growing well.
”A contributory development is that food retailers are building their own greenhouses beside their stores to be able to offer their customers fruit and vegetables with the same freshness as if they had bought them from a greengrocer in the market. This development is good for our products.” ■

About Heliospectra
Heliospectra has its head office in Gothenburg, Sweden. The company has 23 employees, four of whom are in the USA. Sales were SEK 4 million (approx. € 407,000) in 2014.
www.heliospectra.com