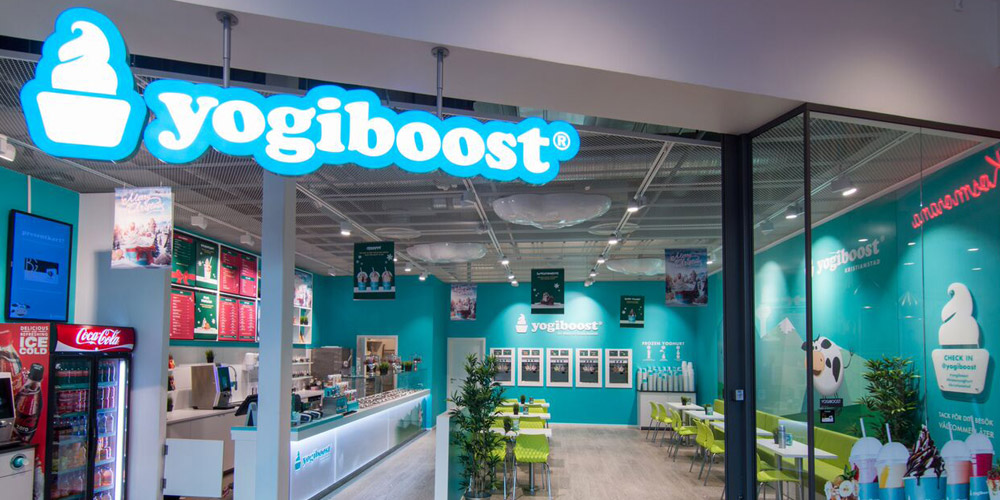 It has been an entrepreneurial fairytale for the Englers. Self-proclaimed ‘ice cream fanatics’, Ludvik Engler Georgsson and  Birgit Engler together with their two sons David and Andreas, decided to start their company Yogiboost after travelling in the US and spotting a gap in the Swedish market for frozen yoghurt.

The family run company set up their first frozen yoghurt parlour in 2013 in Emporia, a commercial centre in the outskirts of Malmö. Their winning concept was to offer their customers frozen yoghurt in a wide range of different flavours accompanied by an endless assortment of condiments for all likings; everything from fresh berries and fruit to marshmallows and chocolate sauce. They took great pride in the customer experience with colourful visuals, pleasant atmosphere and friendly staff. The future was looking bright for the small company.

However, after just a few month of being in business together, Yogiboost received a letter from Nordic dairy giant Arla. They claimed that the trademark Yogiboost was infringing on Arla’s brand Yoggi. Arla argued the two brands could easily be confused as a result. Also, Arla claimed that Yogiboost was free-riding on the reputation of Yoggi. Yogiboost disagreed on all counts.

Awapatent’s European Trademark Attorney Kristina Fredlund and Attorney at Law Fredrik Lüning were quickly called in to assess the allegations.

“Ludvik and his family were genuinely surprised when they received the letter. The thought that they might be infringing on somebody’s trademark hadn’t even crossed their minds as surely any frozen yoghurt product could have the letters Y-O-G in it,” says Kristina.

The proceeding negotiations between Yogiboost and Arla didn’t bear any fruit and the case was soon brought to court where Yogiboost was sued for trademark infringement. Yogiboost answered by countersuing Arla and requesting cancellation of the Yoggi trademark as it legally covered a wide range of food products – from bread to jams – but in reality was only used for yoghurt.

The case had many twists and turns.

Originally, it consisted of two separate trials – one infringement action in Malmö and one cancellation in Stockholm. They were combined into one and transferred to the District Court of Stockholm, 5th Division, later to become the Patent and Market Court. This change of court venue was precisely what Yogiboost wanted to achieve as the trial was now managed by experts in IP, who were more likely to see the different aspects of the case.

Why would Yogiboost even want to infringe on Yoggi’s trademark? It is a 1970s brand and nothing that a young and modern company like Yogiboost would want to be associated with..

“It is a big difference between buying a litre of yoghurt in the supermarket and going into an ice cream parlour for frozen yoghurt,” explains Kristina.

Arla brought in evidence, dating back to the 1970s, in order to prove that their brand Yoggi has been in use for over 40 years. They argued that Yogiboost was getting a free ride on their well-known brand.

“An interesting point was raised at this stage, says Kristina.

“Why would Yogiboost even want to infringe on Yoggi’s trademark? It is a 1970s brand and nothing that a young and modern company like Yogiboost would want to be associated with.”

To make a stronger case, both Arla and Yogiboost commissioned market surveys to be conducted and used the results as evidence in the trial.

The survey Yogiboost commissioned was the first of its kind, to our knowledge, before a Swedish court. Two groups, with 500 people in each, were presented with the two brands in a particular order. Group A saw the brands in the order of 1 and 2. Group B saw the brands in the order of 2 and 1. They were then asked one question: Do you recognise this brand? The assumption is that if you show the new brand first and if it can be confused with the older brand, people might think it is the older brand they are being shown. More people will recognise it in this case than if they had seen the old brand first, followed by the new brand. The results are then examined and if there is a noticeable difference between the two groups, one could assume that there is a risk of confusion between the brands.

In addition to this new style of survey, more traditional market surveys were presented by Yogiboost and Arla respectively.

In the case of Yogiboost and Arla, the results were unanimous: Yogiboost did not infringe on Yoggi’s trademark according to any of the surveys.

The District Court of Stockholm found in favour of Yogiboost. They stated that the trademarks are not confusingly similar and that the evidence provided in the market surveys of Yogiboost could not be disregarded.

On 18 October 2016, the judgment was handed down by the Patent and Market Court of Appeal.

The court ruled that two brands were not similar enough to be at risk of being confused with each other. Yogiboost had won the case and the judgment final and unappealable.  In addition to losing their lawsuit against Yogiboost, Arla ended up losing their registered trademark rights for Yoggi covering all other food groups with the exception of ‘dairy products containing bacteria culture’.  In addition, they were ordered by the Court to pay all litigation costs on Yogiboost’s behalf.

“People talk about theoretical justice, where the one who’s right is right. And then there is a practical justice, where the one who is right is the one with the most money and who can afford expensive lawyers and pricey lawsuits. But in this case, a small family run company had the guts to stand up against a giant company who used every trick in the book to defeat them. The small company came out winning in the other end. It was a case of David vs. Goliath. I think it is really cool,” says Kristina.

When the dispute was over and the battle against Arla was won, she received an email from Ludvik at Yogiboost:

“I initially got a bit weary when he said that things hadn’t ended properly with the lawsuit. But when he went on to explain that we hadn’t had any bubbly and hugs to celebrate our victory; I couldn’t help but smile. So that is exactly what we are planning to do now.” ■
Photo: Yogiboost

Footnote
Yogiboost is currently in the process of opening 100 cafés in China as a part of a franchise system.
www.yogiboost.se