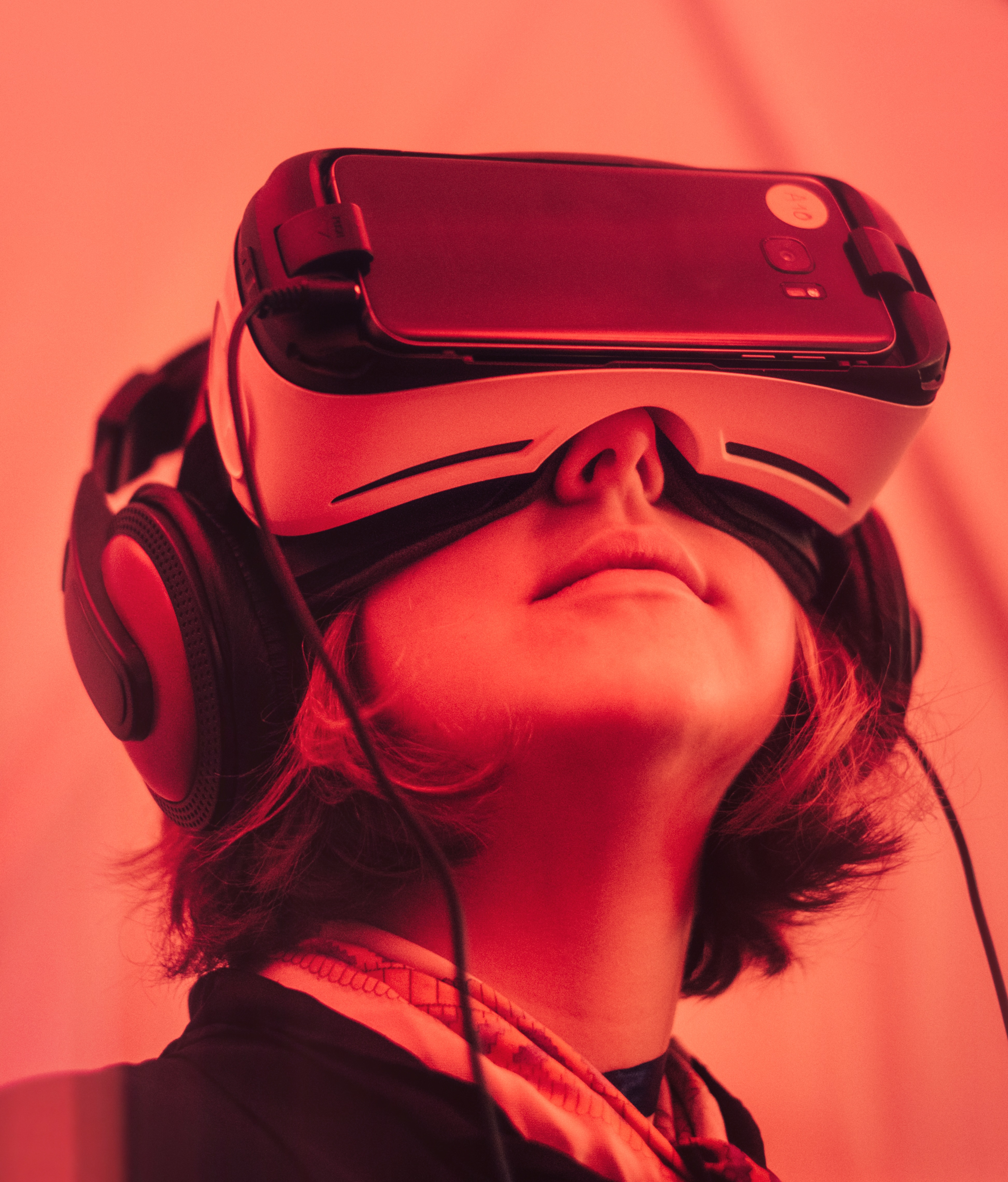 Before long, billions of people around the world were working and playing in the OASIS every day. Some of them met, fell in love, and got married without ever setting foot on the same continent. The lines of distinction between a person’s real identity and that of their avatar began to blur. It was the dawn of new era, one where most of the human race now spent all of their free time inside a video game.

– Ready Player One, by Ernest Cline

In the near-future portrayed in the novel Ready Player One, the characters live, work, and hold most of their possessions in a virtual world of OASIS.[1] In 2018, director Steven Spielberg will bring this world to the big screen. The concept of living your whole life in a virtual world is probably easy to dismiss as fiction, until the first time you try on an Oculus Rift headset and realise that your “real” surroundings instantly ceases to matter, and all your senses become completely focused on the world projected before your eyes. In a slightly earlier generation, more than 20 million subscribers joined the online world of Second Life, buying and decorating virtual houses, and shopping at virtual malls using a currency created by a company that ran the online world.[2] In 2015 alone, Second Life had an estimated GDP of $500 million.[3] It won’t be long until these two concepts—a virtual world and virtual reality—are combined, just as predicted in Ready Player One.

From our own experience, the way that non-millennials (including those who populate most government agencies and courts) usually approach things like a virtual world is from the perspective of what we know as the “real” world. We are constantly looking for a “realistic” feel, and we compare objects and interactions with how they would be if generated by Mother Nature. This is exactly what we believe to be the greatest challenge for IP professionals working in a virtual environment of the future.

Legislation always evolves much slower than technology and naturally stems from the physical world we live in. This, of course, leads to lawmakers and IP offices using the “real” world as a starting point and pinning virtual creations to a real world context. Can something “virtual” be considered an article appropriate for utility or design protection when it never exists in the real world? Can a consumer be confused as to the source of an article that does not really exist?

Attempts by Courts to Reconcile the Real and the Virtual

For example, for the “real” world view from the European Patent Office, consider the appeal[4] in which Immersion Corporation sought to patent human interaction with a pet in a virtual environment. The board took the real world view when it concluded: “Instead of a virtual electronic pet which the user is not supposed to handle, the board considers that the starting point for the assessment of inventive step must rather be a device which the user is supposed to hold.” Thus, in the appeal board’s view, the important interaction takes place between a human and a haptic device in the “real” world, while others might argue that the true value in the interaction lies in the virtual human interacting with the virtual pet. The haptics are, in this case, merely a generic extension of the human senses. The board took the terms “‘biological status’ and ‘health state’ to be metaphorical ones referring to the perception of a human observer in view of their expectations about the behaviour of a real pet.”  Accordingly, the Board concluded that “[i]n technical terms, however, both are essentially undefined parameters of the internal state of the virtual pet software or device.”  Thus, the board clearly marked a distinction between what is considered patentably distinct subject matter in a virtual versus the “real” world.

Likewise, in the United States, courts have struggled with the question of whether a design patent for a physical article can be infringed by a virtual article—in one case, inside a video game.[5] The asserted designs were directed to “stun guns,” which appear to resemble brass knuckles. The accused infringer, Activision, moved to dismiss the complaint, arguing that under the U.S. standard for design patent infringement, no ordinary observer would mistake the weapon in its video game for the design claimed in the patent. To be clear, the design and the accused product looked nothing alike. But the court dismissed the case, not on this ground, but rather because it found that no reasonable person would purchase Activision’s video game believing that they were purchasing plaintiffs’ stun gun. In other words, in the court’s view, it seems that no reasonable person would have confused the virtual with the real.

Courts in the United States have considered the issue of whether the maker of an online game may use the “real world” trademarks of others as part of that game. In 2008, a federal appeals court in California considered whether the makers of the Grand Theft Auto game had a First Amendment defense under the U.S. Constitution for its use of the setting for a virtual strip club (“Pig Pen” club) against the trademark owner of the “Play Pen” club in Los Angeles, California.[6]  The court concluded that the use of the modified trademark in the game was protected by the First Amendment because the modified trademark was not explicitly misleading. But the court also grounded its decision in part on its observation that “[i]t . . . seems far-fetched that someone playing [the game] would think [the Play Pen owners] had provided whatever expertise, support, or unique strip-club knowledge it possesses to the production of the game. After all, the Game does not revolve around running or patronising a strip club.”[7] But in the future, it seems completely plausible, as the lines between reality and virtual worlds blur, that such a conclusion no longer seems “far-fetched.”

IP Challenges When Protecting Virtual Ideas in the Real World

Against this backdrop, consider that utility patents on a general level have been facing ever increasing difficulties. In the United States, the Alice decision from the Supreme Court has armed Examiners with a test for unpatentable “abstract ideas,” and in Europe, the difficulties with navigating between the exceptions for “presentation of information,” “game play,” and “computer programs as such” is as present as always. The established solution for circumventing these obstacles has, for a long time, been to tie the software to hardware components. As the number of virtualisation layers increase, however, the concept of framing high-level software in a (most of the time) generic hardware environment is becoming increasingly abstract, to the extent that it sometimes ends up becoming a complete formality fiction. The eagerness by lawmakers and governments to pin virtual objects to the real world leads to questions such as, “What does a design object look like when printed in 2D?” and “What is the back-end data flow during a simulation?”—questions that the designers and high-level programmers typically consider to be completely irrelevant.

Systems for design protection have also encountered challenges with handling virtual designs. With the exception of the Korea Intellectual Property Office, today applicants must submit 2D representations for all designs—both 2D and 3D and real and virtual designs. While this has not been an issue for physical articles, which have been traditionally understood to have more than one side, it has been a challenge for those trying to protect 3D virtual designs, where the shape of the article may be more easily misunderstood. For instance, consider the Penrose Triangle:

As a design for a “real” object, this would surely attract an indefiniteness (or perhaps lack of enablement) rejection from a U.S. patent examiner. However, as a 3D virtual design, such an object could meet these requirements if properly depicted. Likewise, while a Penrose staircase could not be built in the “real” world, it could be the stairclimbing machine of choice in the virtual world. Luckily, the top design offices have identified issues with protection of emerging designs and plan to address it through the Industrial Design 5 (ID5) initiative.[8]

Contrary to patent law, copyrights have always focused on the creation itself, rather than the environment it is created in, leading the copyright to be somewhat better prepared for an entry into a virtual world. With copyrights, the issues instead arise on the ownership level. We can only speculate in that we will see future legal battles over copyrights generated by users of a virtual world, where extensive click-through agreements provided by the game makers will be placed against the copyright laws’ intention of protecting the individual creators.

As for trademarks, they represent one of the oldest forms of intellectual property. Reportedly, blacksmiths who made swords in the Roman Empire first used trademarks to identify the source of their wares. While traditionally trademarks have been used to aid consumers in identifying the source of physical goods, there is undoubtedly a quality element to virtual goods. In the future, consumers should be able to rely on trademarks for virtual goods as well. Moreover, while the virtual world may gain in popularity, it is not going to supplant the real world anytime soon, so many trademark owners will wish to use their trademarks in the virtual world to drive sales in the real one.

Entering into an increasingly virtual setting, we are convinced that to protect the business value of objects in a virtual world, the focus of protection needs to be not on how virtual objects look and interacts in the “real” world, but rather how the objects look in, and interact with, the virtual world they are created in. As Second Life has shown us, there is undeniably going to be business conducted and money made in the virtual world. This is further emphasised by the rapid rise in the popularity of blockchain-based currency, such as Bitcoin. It has shown that currency may also be disconnected from the real world and, thus, that stable trading in a virtual world would be entirely possible without ever using a traditional currency as reference.

The imminent increase in virtual worlds will naturally draw talented inventors, designers, and artists to these worlds, as well as competitors and counterfeiters. Virtual consumers will want to rely on source and service identifiers. In other words, IP will continue to be relevant in the virtual world. IP professionals will need to ensure that inventors and designers are not left without efficient means to protect inventions and designs simply because they are in a “virtual” environment. If we fail to develop the systems of IP rights alongside technology, there is a risk that business opportunities connected to virtual creations are lost, which may ultimately slow the development of the knowledge economy.