How blockchain can change how we view IP rights 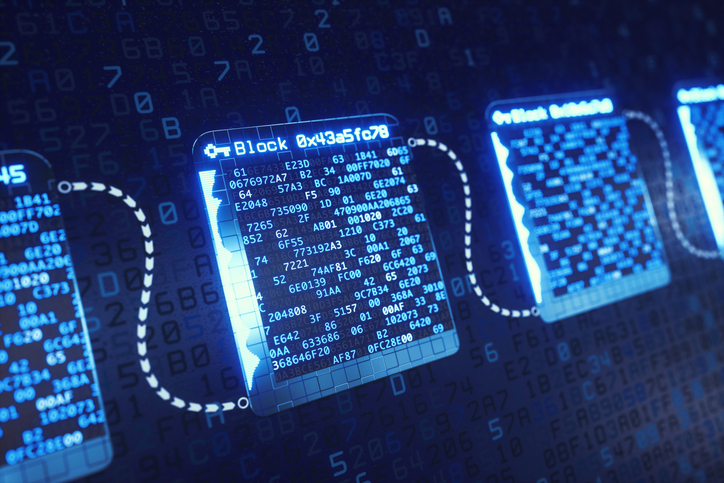 Blockchain has lately risen in popularity with uses such as the cryptocurrency Bitcoin, and new applications are implemented or suggested almost daily. As an emerging technology with the possibility to validate, preserve and track digital data, and to provide a platform for low cost and transparent for transactions on a global scale, it has the possibility to revolutionise sharing of digital assets. So what are the implications for the management of intellectual property?

As the trade market becomes more and more global, the market for registration of IP assets is growing as well. Last year, USPTO received a record amount of new trademark registrations, adding up to more than 440,000. The IP industry landscape relies on third party authenticators for trademarks and patents, all of them created in the pre-digital age, with registration authorities spread across the world. Entering a new record into the system, such as registering a patent or a trademark, involves a costly screening process by a legal framework, which must be repeated for every country or region where the registration of ownership is to take effect. Even global initiatives using international agreements have not managed to achieve more than a common framework for application with some common attributes, but with limited legal effect. In other areas, in particular copyright for digital assets, registration is difficult or non-existent.

The situation is very similar in the financial world. A flora of local registries in the form of private banks and loan institutes manages local assets globally with the help of standards in the form of currencies and exchange rates. Despite this established legacy, Bitcoin has in a few years managed to establish itself as a new global currency, managed with a public registry and based on open source code. Would the same be possible to achieve in the realm of IP?

Information Age states that the development of blockchain for IP management use will be more challenging than for the financial industries, since proven methods of verification exist. However, Bitcoin was able to disrupt large parts of the financial market despite the fact that national and international methods for financial verification were in place. The key was the development of a system from the bottom up.

A distributed ledger technology is a concept where a database, or ledger, is kept in multiple copies on a peer-to-peer network. Each computer holding a copy forms a node in the network and updates itself in relation to the others. When a new record is added to the ledger, it needs to be verified against all the other nodes, which makes it very hard to falsify data, as there is no central data store. Blockchain is perhaps the most commonly known form of distributed ledger technology. It has been named blockchain because each record of the ledger is called a block, and they are connected in a chain to form the ledger. Each block holds both a cryptographic key as identification, and another key, identifying the previous block in the chain. If data is changed within a block, the key is changed accordingly, and when compared to the other members of the chain, the block will no longer fit and be rejected by the ledger. In this fashion, new data can easily be added to old data by the formation of a new block, but it is very hard to change existing data blocks. Bitcoin is probably the most famous form of a distributed ledger, but it was actually not invented there, but was first used for the creation of digital timestamps. Watch this short movie for a quick understanding of blockchain technology.

The most important benefits of distributed ledger technologies are:

– Oversight is crowdsourced and the need for a central authority is removed. This will effectively remove large costs and delays related to bureaucracy;

– Security is improved with an increasing number of users. For a hacker attack on the system to succeed, it must hit (almost) all nodes simultaneously, and this will be much more difficult, the larger the ledger is;

– Providing a time stamp. In most countries, the rights to an invention belong initially to the first person to file a patent application (“first-to-file system”). This means that the application date is very important in the patent process. In this context, the blockchain’s ability to create an immutable date of creation is an appealing trait;

– Providing a record of transactions. The chain is updated with each transaction, so users can see the chronological activity for that particular blockchain, effectively creating a chain of custody for each IP;

– Lower administrational cost. When a new user enters a public blockchain network, that user becomes both the client and the governor. Instead of setting up a central bank or governing body, effectively introducing both bureaucracy and cost to the administration, blockchain gives each user the power to communicate on equal footing, as each node is part of the ecosystem.

Blockchain use in IP

The technology of blockchain became famous with the use of Bitcoins, but its usefulness far outweighs that of a simple digital currency. Applications range from finance, merchandise distribution management, and the sharing economy. Though the source code for Bitcoin is open source, patents are emerging for blockchain-related solutions, and the blockchain technology has triggered the filing of numerous patent applications for related technologies in recent year across a broad spectrum of industries. A worldwide search on Espacenet for patents titled “blockchain” will result in 17 hits for 2016. Two years later, 2018, the number is 672. Commercial solutions have not been far behind. A week ago, SONY announced the development of a rights management system for digital content, based on the blockchain technology. They are far from first to market. Estonian company Agrello is working of creating an application for legally binding smart contracts. Bernstein is offers blockchain based solutions for intellectual property management. Everledger has used blockchain to create a database of diamonds, to ensure that they are not being used to fund conflicts. Blockai (or Binded) registers work of art, creates a timestamp and serves as a proof of copyright. Several other companies have created a business model around IP rights; Stampery, Signatura, bitcoin.com, Proof of Existence, Copyrobo, Vaultitude and Blocknotary. A number of open source or semi-open source initiative have also been launched, such as IP-Chain by Unity Labs, Openchain and Hyperledger by Linux Foundation. Generally, a registration of an IP to a distributed ledger will not necessarily mean it has to be made public. The registration can be kept private using encryption, the uploaded document or resource will remain confidential, but the registration will establish the possession of it at a specific time, and guarantee that it has not been tampered with. Even though the digitisation of copyrighted sound or text is nothing new, the ability to prove authorship of a modified copy can be difficult. Blockchain technology has the potential to create a digital footprint of the work which would allow for better control of the use, while at the same time making the work publicly accessible. TaTaTu has launched a blockchain-based video platform, Ujo a corresponding for music and this year we saw the first blockchain-powered Music Festival.

However, the use of distributed ledgers is for sure here to stay. As with many emerging technologies, blockchain has attracted various opportunists, and as the number of applications increase, an increasing number of governmental agencies are getting involved. The European Union Intellectual Property Office (EUIPO) are looking into the capabilities, the EU Commission has plans for a blockchain observatory and the US Chamber of Digital Commerce has recently launched the Blockchain Intellectual Property Council (BIPC) with the aim to combat blockchain patent trolling. Global standards have been discussed by various organisations.

The advocates of blockchain often express a desire for a method to connect registries across the world through a single distributed ledger – the ultimate database. However, the reality is far from that simple. Successful management of IP rights using blockchain requires an agreed upon and internationally supported platform. In this way, the blockchain as technology presents no differences from current systems. Technical means to connect registries exist today. The problem is as always rather the issue of aligning national and regional judicial frameworks and traditions. To such issues, no technology will ever be able to provide the magic solution. Distributed technologies are a great tool for democratic grassroots movements, not necessarily the best tool for corporations attempting to commercialise on distributed ledger technologies. The lesson is – don’t attempt using blockchain if you already have another technology doing the same thing, unless you see a way of reducing the cost of operation. Despite the increasing use and value of Bitcoin, it has not, and will not replace the need for established financial institutions in the banking system. Rather, the systems coexist, complementing each other. Most likely, the case will be the same in the world of IP.

What is your view on IP rights, open source, copyrights and human rights? Please get in touch on alm@awa.com

Singles’ Day falls on 11 November in China. Since 2009, it has become a 24-hour shopping extravaganza, with international