Antibodies vs. the EPO – What scope of protection? 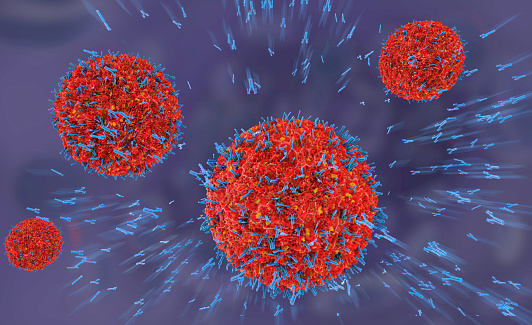 Antibodies are currently enjoying great attention and are, together with their derivations and combined applications, growing to occupy centre position in the therapeutics and diagnostics fields.

Indeed, the possible industrial applications have increased many fold since the harvesting of the first monoclonal antibodies by researchers Ehrlich & Metchnikoff, which led to an effective syphilis treatment as early as in 1910. Today, monoclonal antibodies are rapidly dovetailing into such new areas as immunotherapy, multispecific antibodies, antibody drug conjugates or CAR-T. Consequently, the worldwide antibody market size is approaching USD 90 billion and is expected to exhibit a growth rate of 5.7% per annum between 2018 and 2024[1].

Our burgeoning awareness of immunity began some 3000 years ago with the discovery that powdered smallpox scabs could be used to protect people against the disease. It is now known that this protection is mediated by our adaptive immune system (AIS), which, driven by lymphocytes and DNA rearrangements, creates a myriad of receptor specificities towards many targets, called antigens.

Antibodies are large protein molecules occurring naturally as part of the AIS in humans and other vertebrates. They are able to selectively bind and neutralise pathological agents within the body. The antigen receptor specificity of an antibody is ensured by virtue of its complementary determining regions (CDRs), which are contained within the variable fragments and produced by the abovementioned DNA rearrangements. The CDRs form the antigen-binding site (Fab), or paratope, on the amino-terminal ends of the antibody molecule. The remainder of the molecule is formed by non-variable, or constant (Fc) fragments.

In the US, it has previously been possible to functionally claim an antibody by its ability to bind a novel target. However, this broad-claim approach has recently been challenged by the US Court of Appeals for the Federal Circuit ruling in Amgen vs. Sanofi [2] that such an approach does not meet the requirement for disclosure of the invention in the specification. This appears to leave broad antibody claims hanging on a thin thread in the US, and ushers in the ominous thought of more complicated drafting and prosecution for applicants wishing to seek protection in jurisdictions with diverging precedents for validity.

Before the European Patent Office (EPO), the same requirements for patentability are applied to the patenting of antibodies as are to other inventions. The EPO currently considers an antibody to be novel if its target is new, and it will usually be considered inventive as long as the antigen is sufficiently disclosed in the application. This holds true even when only claiming one or several functional features, e.g. binding affinity (such as a Kd or Koff value), without limitation to a particular sequence, if the properties are not known from the prior art [3]. At the same time, standardisation of techniques for antibody production, selection and purification has led the EPO to deem the production of monoclonal antibodies by the hybridoma technique as routine. In other words, such production is not considered to involve an inventive step and, thus, is not patentable [4].

When seeking the broadest scope of protection, one must therefore strive to achieve a balance that will offer the best chance of withstanding a validity challenge like in the Amgen vs. Sanofi case. A claim supported by extensive testing will significantly improve these chances and, at the same time, sizably expand the scope of protection to include important commercial developments. Success will mostly depend on the available technical data at the time of filing, or on the likelihood that sufficient data will be generated that could support an epitope claim, such as alanine scanning, deletion studies, epitope binning experiments, crystal structures, or other work that would shed light on competitive binding. With regards to inventive step, EPO Boards of Appeal decision T1329/04 determines that it is possible to rely upon supplementary data filed subsequently, but also that these must be at least plausible at the filing date [5].

In the case of claiming a new antibody to a known target, T735/00 determines that “an unexpected effect” in the form of non-predictable functional characteristics must be demonstrated for inventive step to be acknowledged [6]. In addition, the disclosure of all six CDRs may be required; unless data is available showing that any characteristic relied upon is achieved with fewer CDRs. This requirement may also include the full disclosure of the Fab sequence if the framework regions are considered to play a role in the binding affinity or if they are otherwise relevant to the characteristic(s) relied upon.

Likewise, the antigen to which an antibody binds may be defined structurally, e.g. by reference to the amino acid sequence of the epitope in the antigen, or functionally, e.g. by reference to a specific monoclonal antibody which binds to that epitope. For a claim functionally defining an epitope to succeed, however, it will typically be necessary to demonstrate that some unexpected, advantageous property is associated with the epitope.

With regards to sufficiency of disclosure, a given subject-matter is sufficiently disclosed if the specification provides a teaching that enables the skilled person to find suitable variants that have the same effect as the molecules exemplified in the specification. Indeed, T431/96 and T617/07 determine that a claim concerning antibodies defined by structural and functional features (e.g. CDR sequences and a functional effect as described above), and where the skilled person would be able to rework the invention and provide antibody variants having the functional requirements indicated in the claim in a straightforward, albeit time-consuming manner, the invention is deemed sufficiently disclosed [4] [7].

In summary, the advantages of broad-scope protection may still be considered low-hanging fruit before the EPO, as evidenced by recent case law. This is no longer the case in some jurisdictions, nor does it always hold true for antibodies for which an unexpected effect of target binding is lacking. Claiming an antibody for a known target for instance, may require a time- and resource- costly generation of data and a noticeable increase in drafting and prosecution efforts to produce a patent with sufficient disclosure to withstand validity attacks.